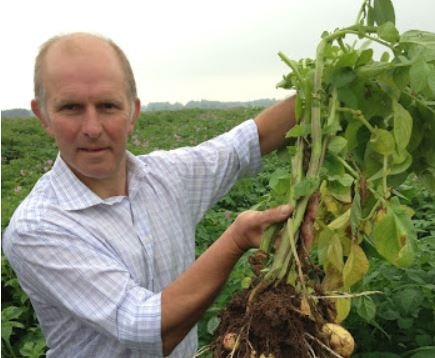 Exceptionally good conditions across England and Scotland have enabled a speedy harvest of seed potatoes, according to leading potato breeder Agrico.

Approximately 70-80% of the crop is out of the ground and initial reports indicate quality is good while yields look to be around the 5-year average.

“We’ve been blessed, generally, with very good weather and the seed harvest is well underway,” says executive director, Archie Gibson.  “Good progress has been made across the whole of seed growing areas.”

“It’s maybe been a little dry in some areas in the south of England but that’s been remedied with a little rain in the last couple of weeks. I know in the east it’s been a bit tougher on the ware growers.”

Agrico’s agronomic team have completed test digs on over 400 crops across both countries.

“Quality-wise, we’re very encouraged by what we’ve seen,” summarises Mr Gibson.  “Skins are in good condition and the potatoes are coming out the ground in good order. Our store at Castleton is filling up day by day, the positive ventilation is on and working hard.”

Due to the pandemic, English seed crops have only received one certification inspection. In response, Agrico have supported growers throughout the season, reviewing crop growth and virus pressure, offering advice where appropriate.

“All our English seed will be post-harvest virus tested so our customers can be reassured, they are getting the highest quality product,” says sales manager, Alex Moore.

“We will be checking stocks in stores regularly and our sampling programme means we will have accurate seed counts before delivery.”

Having visited growers regularly throughout the season, Alex doesn’t anticipate any issues. “Following a dry spell post planting, which has led to fewer numbers, growing conditions have been favourable and crops have looked well ever since,” he says.

“In England, we saw the first crops coming out the ground in Norfolk at the end of August and beginning of September. In the west of the country – Shropshire and Wales – growers were done nice and early. Only in Yorkshire have we had rain. 50mm fell last week which has slowed harvest down but we’re still looking at 70% out of the ground in the county.”

Lifting has been non-stop in Scotland too, says agronomy and procurement manager, Gavin Prentice.

“We’ve experienced exceptional weather conditions.  Some growers haven’t had to stop for a single day, which is unheard of and means harvest should be completed much earlier than usual.”

“Potatoes coming out of the ground are looking good and the dry conditions mean there is little earth going into boxes. However, we may see more damage and bruising as a result of less soil travelling over the harvester webs. Provided growers get sufficient air around the crop, grading should be relatively straightforward.”