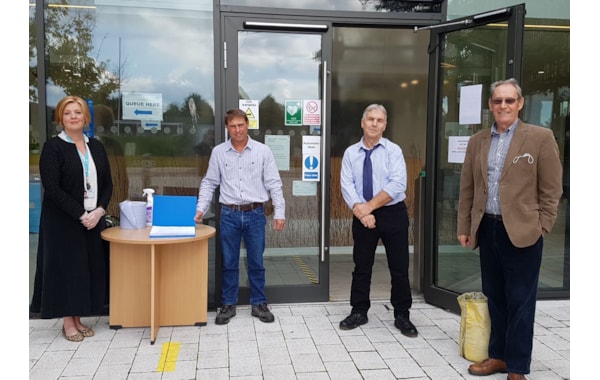 BRITISH growers have questioned why the official ballot on the horticulture levy of the Agriculture & Horticulture Development Board (AHDB) will not take place until next year, warning that attempts to upromote AHDB’s activities in the meantime could be viewed in a negative light by the industry.

AHDB confirmed last Tuesday (October 6th ) that the number of requests for an official ballot on the levy exceeded the required threshold. However as an independent company must be appointed to administer the process, the vote itself is not likely to take place until January 2021.

The ballot was described as “the elephant in the room,” by AHDB Chairman Nicholas Saphir at the online FPJ Live event on the same day. He said: “AHDB is duty bound to call a ballot and it is the first ballot that has been called in the history of AHDB. The programme will have to be developed on how the ballot is called. We are duty bound to appoint an independent overseer which is in process now, we then have to verify who is entitled to vote, we have to send out voting papers and we have to allow some time for the arguments to be developed on both sides. My guess is we will see a ballot take place early in January.”

The length of time that AHDB says is necessary to organise the ballot has been queried by the AHDB Petitioners who organised the request for a ballot.

Cco-organiser Simon Redden said: “We were able to appoint Civica Election Services and launch our own ballot within three weeks, so we can’t understand why it should take an organisation the size of AHDB three months to do the same for a single question. The AHDB has already had six months to respond to the results of Defra’s call for views and have only now just started to talk about ‘serious reform’ when faced with a grower-driven ballot which they never anticipated.”

However, the petitioners welcomed Nicholas Saphir' assurance that both sides would have the chance to put their views to levy payers before the ballot.

Vegetable and potato farmer John Bratley said: “We welcome Mr Saphir’s comments that the arguments from both sides will be put forward and we wait to see how this will be achieved.”

Since the requests for a ballot were formally presented to AHDB on September 29th the petitioners have continued to receive completed ballot request forms. Vegetable grower Peter Thorold said: “Our poll showed that that 92% of growers felt current AHDB policies are of no, or marginal, benefit to their business, while 80% did not want to pay a statutory levy. AHDB’s claim that 64% of Defra review respondents supported the statutory levy refers to the farming sectors and not horticulture,” he said.

“Even though the results of this ballot are not binding on ministers, failure to recognise them or to implement the reform which is clearly necessary will be seen as a slap in the face by horticulture and the wider farming industry.”

Responding to the timescale query,Nicholas Saphir, stressed that AHDB has a responsibility to all levy payers to adhere to the processes laid out in statute.

“This dictates that we follow the Government’s Crown Commercial Services procurement process to appoint an independent organisation to administer the ballot," he said. “As an arm’s-length, non-departmental Government body, if we do not follow the rules, any ballot process could be declared null and void. AHDB is an evidence-based levy organisation and, as such, will ensure that correct information is available for growers to make fully-informed decisions.”