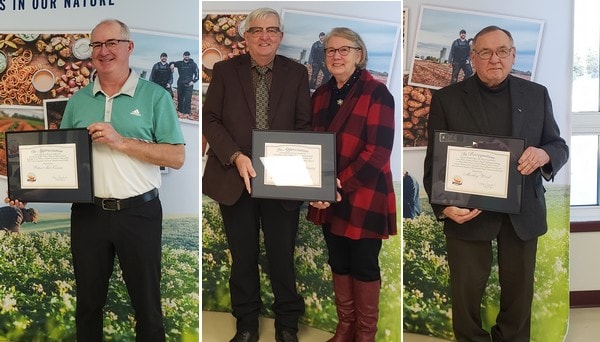 The PEI Potato Board traditionally presents Potato Industry Recognition Awards at its annual banquet to recognize individuals who have made significant contributions to the industry. Three awards were presented at the board’s monthly meeting in March 2021 and they will be recognized at the banquet in 2022. The award winners for 2021 include:

Peter McKenna: Peter McKenna learned the potato business from his father Terence and Uncle John. In 1979, he started working in the family potato brokerage and packing business.

When McKenna Brothers were looking to expand into the offshore export market in the late 1980s, they recognized the value of mentorship and continued to work with Mitch MacLean when they took over his export business, Island Shipping.

Peter was active on the executive of the PEI Exporters Association for years and was also a member of the Board of Potatoes Canada in the 1980s and 1990s. He advocated strongly to the Canadian Food Inspection Agency for the negotiation of phytosanitary agreements that would allow the shipment of Prince Edward Island/Canadian seed and fresh potatoes to export markets, including Uruguay and Venezuela.

Charles and Wilhelmina Murphy: Charles and Wilhelmina (Willie) have farmed for more than 53 years. Charles was one of the early Elite Seed potato contract producers working closely with Agriculture Canada and the Potato Board to produce high-class seed potatoes for Island commercial producers. In 1993, they started their screenhouse nuclear production which they continue to do. Seed potatoes remain the focus of the operation.

In 2007, the Murphy farm won the Canadian Horticultural Council International Award for champion seed potatoes at the Royal Agricultural Winter Fair in Toronto. The Murphys have served on many committees and organizations and still today, they maintain strong community ties. Charles has served in numerous leadership roles of the Potato Producers Association of PEI.

Morley Wood: Morley Wood is the fifth generation to farm the land near Albany, PEI. Morley is a founding partner of Mid-Isle Farms, a major packing shed operation in Albany.

Morley has provided leadership to the Prince Edward Island potato industry for decades. He served four terms as chair of the PEI Potato Board, was vice-chair for two terms and served for nine years on the board. He represented the board on the PEI Federation of Agriculture Board of Directors, and served on local committees including the Farm Practices Review Board and the Continuing Education Credits advisory committee for pesticide licensing.

He has contributed to numerous potato organizations for many years as well. He’s been a long-term director on the Canadian Horticultural Council, representing the Potato Board and more recently, Mid-Isle Farms. He served on the Board of United Potato Growers of Canada.