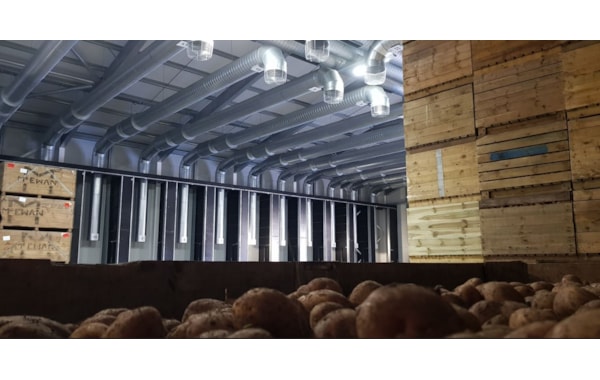 Branston’s factory is in the middle of the village of Abernethy, Perthshire, faced an uphill challenge of overcoming noise issues when it installed its new potato store at one end of the site, adjacent to housing and other commercial premises. The nearest house is less than 10 metres away.

With a building that contains 31 fans, keeping noise levels within the limits stipulated by local planning regulations was no mean feat but developer Crop Systems Limited managed to overcome this by installing silencers to all the ducting in the building and adding extra insulation around all major equipment.

In addition, all the fans used to move air around the facility are of a special quiet running design.

Fitting the store onto an irregular-shaped site also posed some problems, but the design achieved this, creating a 1,400 tonne capacity store where its two predecessors could hold just 910 tonnes.

Ray Andrews, from Crop Systems Limited said: “It is an unusual shape and meant we had to install 900 separate pieces of ductwork and 31 fans to ensure efficient air flows around the 26 automated storage bays. ”

At full capacity the new facility holds around 1,350 tonnes.

The site’s General Manager, Kevin Imrie, said: “Our previous stores dated back to the 1980s and were nearing the end of their serviceable life. Insulation efficiency was deteriorating and the chilling equipment was getting old and unreliable. One particular concern was that we could not chill crops quickly enough if the ambient temperature was above 15C.”

The facility was built in six weeks, with the rest of the factory continuing to function as near as normal while the work was in progress, while still ensuring that the site complied with safety regulations.

Warmstor is a concept created by Crop Systems Limited to warm the crops very gently over a two or three-day period as they come out of low temperature cold stores in readiness for processing.

The facility uses low grade ambient air via a heat-pump, and can also be used to cool new potatoes with high field heat, maintaining the quality with the high humidity system.

“This store allows us to both warm and chill crops in the same building, and improves our conditioning because we have better control of the temperature and airflow. As a result we can achieve more consistent crop temperatures before we process them through the factory,” said Kevin.

“That translates into a better quality of product for our customers, because the potatoes are less susceptible to damage or bruising when being handled. They are also less susceptible to ‘thumb nailing’ – the damage that can occur when the tuber’s skin splits as it warms up.”