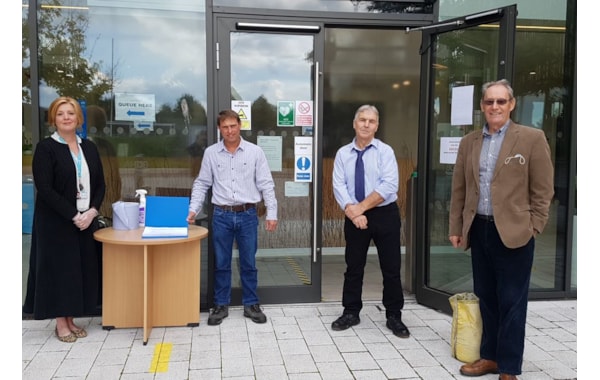 The UK horticultural sector has triggered a formal ballot on the continuation of a compulsory levy for horticulture to be paid to the Agriculture & Horticulture Development Board (AHDB).

On Tuesday 29th September, 107 formal requests for a ballot on the Continuation of the AHDB Horticulture levy were officially handed to Ruth Ashfield, Strategy Director of AHDB Horticulture. The move is the latest development in a campaign by grass-roots growers seeking to determine the true level of support for the levy body, which they claim is unnecessary, unhelpful and damaging to their business.

A poll of almost 2,000 horticulture and potato levy payers in July showed that 92% of growers felt current AHDB policies are of no, or marginal, benefit to their business, while 80% did not want to pay a statutory levy. Since the poll AHDB has admitted that the top 50 horticultural levy payers typically pay between £50,000 and £200,000 a year to AHDB and that, overall, horticultural businesses pay a much higher levy in proportion to their business compared to other sectors of agriculture which, unlike horticulture, are grant aided under the Common Agricultural Policy and its successor.

Vegetable grower and ballot co-organiser Peter Thorold comments: “We have repeatedly tried to engage with senior representatives of our industry and politicians, but despite the fact that our ballot achieved a response rate above 33% - well above Defra’s own call for views – there has been little recognition of the depth of feeling that exists among growers towards this outdated and undemocratic tax on their businesses.

“Over the last six months AHDB have repeatedly said that if growers feel strongly enough about the levy, they should use the existing legal procedures to trigger a formal ballot on the continuation of a compulsory levy, so with the mandate that we received from our survey, that is what we have now done. We fully expect a fairly conducted AHDB ballot to endorse our findings.”

The Agriculture and Horticulture Development Board Order 2008 requires AHDB to hold a ballot on whether an individual levy should continue if it receives requests to hold a ballot on that levy signed by at least 5% of those entitled to vote in such a ballot, within a period of three consecutive calendar months.

According to AHDB the 5% cent threshold for horticulture equated to just 67 levy-paying grower businesses in 2018. As well as the 107 requests already delivered, further forms are still being received by the Petitioners and these will be forwarded to AHDB, but with more than 110 completed requests so far, there have been almost twice the number required, showing the strength of feeling about the levy in industry.

Under the rules of its establishment, AHDB is now required to organise a formal independent ballot of all horticultural levy payers on whether the statutory levy should continue, which will be independently verified and communicated to Ministers within Defra, however, Ministers are not bound by the results of any such ballot.

Flower grower and ballot co-organiser Simon Redden added: “We think it is disingenuous and arrogant of the AHDB to use existing levy money to pay for a last-ditch PR campaign ahead of the ballot while denying us access to the electoral roll. However, yesterday’s self-promoting press release from Ruth Ashfield suggests this is exactly what they are already attempting to do. Her claim that ‘most horticultural businesses… do value the essential grower-led research programmes,’ is completely contrary to our findings in July when 92% of growers said current AHDB policies are of no, or marginal, benefit to their business.

“Even though there is no legal requirement to bind ministers to the result of this formal ballot, it is inconceivable that the government would act in an undemocratic manner against the wishes of the most commercially exposed sector of British farming.”