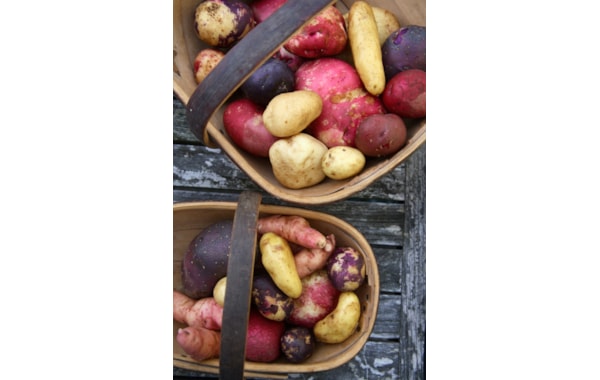 Gourmet potatoes normally destined for upmarket UK restaurants are being sold by Tesco after the supermarket stepped in to help the grower.
Specialist grower Carroll’s Heritage Potatoes, based near Berwick-upon-Tweed in Northumberland, usually supply top restaurants and have worked with celebrity chefs such as Tom Kerridge and Jamie Oliver.
However, sales plummeted following the enforced closure of UK restaurants, leaving them with several hundred tonne.
Tesco shoppers will now be able to buy four of the rare varieties over the next few weeks inluding: Red King Edward 1916 - which has red and white coloured skin is is a favourite of celebrity chef Tom Kerridge; Violetta – which has a blue skin and flesh and a sweet flavour with a floury flesh; Shetland Black 1923 – a dark-skinned variety that changes to a creamy colour when cooked and has a unique blue ring with creamy flesh when opened; and Yukon Gold 1980 - which has a golden flesh which is richly flavoured and fairly firm and moist.
Tesco potato buying manager Ben Rowbotham said: “These are some of the best quality heritage potatoes around in the UK and the fact that they are snapped up by top restaurants and celebrity chefs is testament to that. But they will only be on sale while stocks last and we think that once word gets round they will go pretty quickly.”
Buyers of the gourmet varieties include acclaimed chef Simon Rogan’s L’Enclume which holds two Michelin stars, five AA Rosettes and was named the number one restaurant in the UK by The Good Food Guide 2020.
Lucy Carroll, who founded the business with her husband Anthony 20 years ago but diversified into growing rare, heritage varieties in 2005.
In a recent interview with national newspaper The Guardian, she said: “These are not commercially grown heritage potato varieties, and we produce them for a niche but loyal market of top chefs and restaurants. We produce them twice a year, right now in mid-spring and then later in the autumn, so the pandemic could not have come at a worse time for us. Through word of mouth we made contact with the supplier Branston, which works with Tesco, and managed to find us a major outlet.”