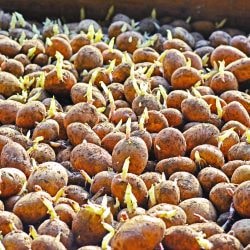 A ban on feeding maleic hydrazide-treated potato waste to livestock has now been lifted, leaving growers free to use the active ingredient without fear of losing their end markets.

Maleic hydrazide – contained in products such as Crown MH and Fazor – is a plant growth regulator applied before harvest to help control volunteers and provide useful sprout suppression once potato tubers or onions are in store.

It can also be used to reduce secondary or chain tuberisation in potato ridges, which is triggered when crops are subject to intermittent periods of growth and non-growth, as seen in 2018.

When the active was granted Europe-wide reapproval 2017, approval holders lacked data to show that a maleic hydrazide metabolite known as 3-pyridazone posed no risk to consumers via livestock when fed with treated crop waste.

Subsequently, the Health and Safety Executive (HSE) placed a label restriction on any MH product sold after May 1st this year, which stipulated that any out grades or peelings derived from treated potato and onion crops must not enter the livestock feed chain.

With packers and processors unable to guarantee segregation of treated and untreated waste without significant cost, it resulted in a “no-take” policy for crops treated with maleic hydrazide products carrying the restriction.

This might have left growers unable to use the product this season for fear of being unable to market their crops.

However, approval holders have now gathered the relevant data to complete all risk assessments and these have concluded that there are no safety concerns to livestock or consumers and as a result, HSE has lifted the restriction on all maleic hydrazide products.

Crown MH is marketed in the UK by Certis and Potato Product Manager Nick Badger said the news is positive for the industry, allowing growers to use the product with peace of mind ahead of the imminent maincrop harvest.

“Many potato crops suffered from secondary growth and tubers sprouting during last summer’s hot and dry weather, but when treated with maleic hydrazide both issues were adequately controlled. With the ban lifted growers can once again negate these problems, plus control volunteers and get some useful sprout suppression in store, without losing their end markets,” he said.

Don Pendergrast, Head of Technical Services for UPL UK & IE, which markets Fazor®, added: “We are very pleased with the removal of the feeding restriction. Maleic hydrazide, which we market as Fazor®, is an important tool for not only sprout suppression, but also for the control of volunteer potatoes in a wider rotation. Whilst minds are on the topic of Fazor, we’d also like to remind growers to refer to the best practice document, which can be found on our website.”

HSE has now issued an amendment to all existing authorisations for maleic hydrazide-containing products. No further action is required by growers or agronomists, so all products can be used without restriction.

“It comes at a critical time for store managers. On a recent visit to Holland and Germany, we saw successful sprout control with spearmint oil and DMN. But in both cases it was used with MH. This predisposes crops to sprout control and will be important in the future to limit increasing costs of storage from the new sprout suppressants.

“Spearmint oil and also DMN, which is not yet approved in the UK, are most efficient in airtight stores – leaky stores, or where a lot of ambient ventilation is used will suffer greater losses of these volatile products meaning they need to be reapplied more often. This is not the case with MH, its stable nature means it brings long lasting sprout control.

“What we saw in Europe matches the results of our own MH review, where we have seen that MH is an effective sprout suppressant and works well in combination with other options.

“Using the characteristics of different varieties’ can be useful. Selecting for long dormancy, and also for tolerance to cooler temperatures in store are ways of becoming more independent of sprout suppressants.

“We have dormancy ranking research underway, which is improving our understanding and it is something else we saw in action in Holland and Germany.”