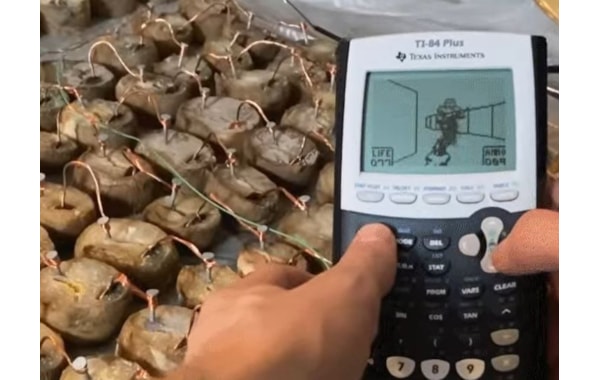 If you’ve got 100 pounds of old potatoes lying around why not use them to play Doom on a graphing calculator?

Ethan Gach, a writer for gaming review website Kotaku, said that’s what YouTuber Equalo decided to do, spending almost a week planning out how many potatoes he would need and in what configuration they should be wired in order to get the appropriate number of volts and amps needed to play the original Doom on a TI 84 Plus. Fans have spent years getting the game to run on every electronic device they can find, but Equalo decided to up the ante by trying to power the game itself using only root veggies.

The YouTuber started the project by measuring how much current he could get out of a single potato, placing a piece of copper at one end and a piece of zinc at the other. He then multiplied that by the amount he’d need to power a Raspberry Pi computer, which eventually led him to boil down and cut up 100 pounds of potatoes into a grid composed of over 700 slices.

It took several days and the decomposing potatoes (boiling them makes them better conductors because it increases their starch concentration) began to smell, but eventually Equalo reached the over 100 milliamps and 5 volts of current he needed. The Raspberry Pi never booted up. Instead of giving up, though, the YouTuber decided to sub in a TI-84 graphing calculator, which both requires very little power to turn on and can also run a very rudimentary version of Doom.