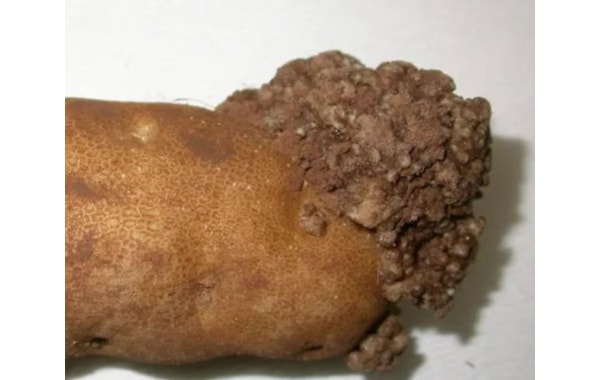 The CFIA confirmed potato wart in fields on two separate farms on October 1st and 14th after growers submitted "suspect potatoes," the agency said in an email response to a CBC inquiry.

The potato wart fungus is spread through the movement of infected seed potatoes and contaminated soil.

It poses no threat to human health or food safety, but is known to decrease yield — the number of good potatoes that can be harvested and sold.

The CFIA took immediate action to impose control measures on the affected fields, it said, to prevent the spread of the fungus.

Although no potatoes from either farm have been shipped outside of the province, the release said seed potato shipments from PEI to the U.S. have been "temporarily suspended."

The movement restrictions do not apply to fresh PEI potatoes for table stock or processing, which continue to be exported domestically and internationally.

Trade of seed potatoes between PEI and the US was shut down in 2000 when potato wart was first found on the Island.

Since then, new protocols have been introduced for monitoring and controlling the spread of the fungus, and there were no trade issues after subsequent discoveries of the fungus, including in 2012 and 2014.

About 15% of potatoes grown on PEI are used for seed.

The US has been the single biggest international buyer. In 2019, $3.1 million of $4.5 million in seed potato exports went to U.S. buyers. The interprovincial and international trade of seed potatoes from PEI represents approximately 2.1 per cent of all P.E.I. potato production when measured by volume, the CFIA said.

"These actions are being taken in order to maintain our markets, including the U.S. market, for table and processing potatoes," the email said. "Specific country import requirements from PEI to all other destinations are currently being evaluated, based on the requirements of different countries as it relates to potato wart."