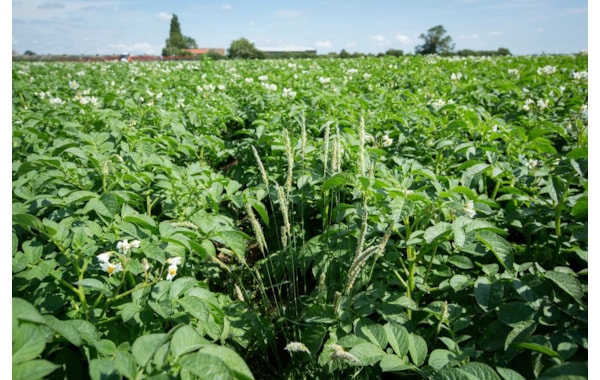 Black-grass resistance to herbicides is getting worse. It cannot be reversed but it can be slowed down according to BASF’s Stuart Kevis.

“Over this relatively short timeframe total resistance, to the main 3 mechanisms, has increased by 12%, from 46% to 58%,” Mr Kevis explains. “However, as worrying as this is, the largest single shift was to ALS inhibitor herbicides, such as mesosulfuron, where RRR resistance grew by 43 percentage points to 78% showing RRR resistance and overall 89% of the total population tested showing resistance to ALS.

“This constitutes a huge loss in levels of control, leaving only around 10% of populations susceptible to these types of contact herbicides, something that has been noted in-field by farmers and agronomists over the past few years”.

Dr Sarah Cook from ADAS estimates that the annual cost of black-grass resistance to the UK arable sector equates to £0.4 billion in lost gross profit and 0.8 million tonnes of lost wheat yield.

She says: “We can reduce black-grass populations but it’s a numbers game that will take a lot of hard work, changes to cultivation practices and further increasing cultural control. We are on a downward trend of control and an increasing trend of resistance as lack of new modes of action means our control ‘palette’ is getting much smaller.

“You have to know what you are dealing with on your own farm, don’t go into denial, get a handle on what you have, which necessitates testing for resistance.”

BASF plans to launch its new herbicide, Luximo®, in 2021 (‘subject to regulatory approval). “It will bring a new mode of action to market,” explains BASF’s Ali Richards, the first in decades. However, in the light of this research its launch needs to be a responsible one.

“As excited as we are about what this new chemistry can achieve, Luximo should not be looked upon as a ‘silver bullet’, we need to promote Luximo as the final part of an integrated weed management (IWM) strategy, working alongside tried and tested cultural controls. Its role should be as a building block that we all need to protect for many future years.”

Bringing Luximo® to market will be a collaborative venture between BASF, distribution partners, growers and agronomists. “Talking to people across the industry is one of the most important things we are doing ahead of the launch.”

BASF will be running a season of Real Results Virtual Farm Tours this summer, bringing together growers, advisors and researchers to talk about how control mechanisms are changing and get individual tips on how best to tackle rising resistance. The events will give an opportunity to see and hear about Luximo® in more detail.

The events will also give farmers and advisors the opportunity to apply for one of 200 free blackgrass resistance tests in return for sharing their best practice tips for blackgrass control.

CPD points will be on offer at the events along with the opportunity to link live to black-grass experts including John Cussans from NIAB, Dr Sarah Cook from ADAS, Professor Jenni Dungait an independent soil scientist and Tom Robinson the spray application specialist. The events are free to join and will run through June and July 2020.