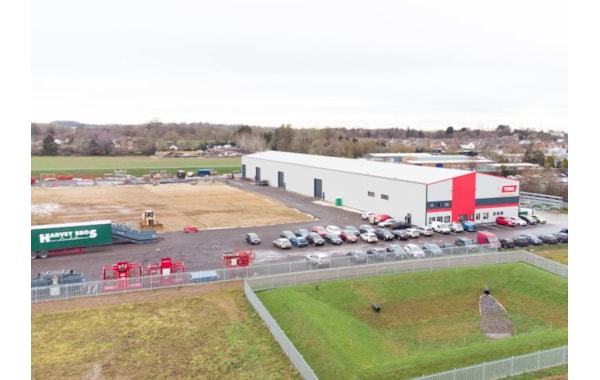 TONG Engineering is ploughing ahead with the construction of the second phase development at its new manufacturing facility in Spilsby.

As part of a planned two-phase project, the company’s £3.6 million first phase building was completed in August 2020. And now the second phase build, of comparable investment, is set to commence on the seven-acre site this month, with plans to move into the new facility in the Autumn.

“We are very excited to be able to proceed with our plans for the next phase of our new factory,” says Edward Tong, Managing Director at Tong Engineering. “Despite a somewhat challenging 2020, we were extremely thankful that our plans for the first phase build were able to progress with minimal disruption, allowing us to start operating from the new site in the summer,” explains Edward. “Since the completion of our first phase building, we have noticed a huge difference in our final assembly capabilities and processes. After almost 6 months at the new site, it is now hard to imagine how we operated without the increased height and space that we now consider invaluable in the new factory. We are very much looking forward to enjoying these same advancements across all of our departments with the addition of the next phase building this year.”

The purpose-built first phase manufacturing facility stands at over 126 metres long, 24 metres wide and 11 metres high. The new second phase build will see another facility, identical in size, constructed alongside the existing building. In addition, a third building will be constructed alongside the new second phase, predominantly for storage of components and equipment.

“We are currently working across two sites; the new site and our existing site which we have occupied for over 70 years,” explains Edward. “The new site is currently dedicated to our aftersales departments, stores and final assembly processes, and also houses our advanced new shot blasting and powder coating facilities. On completion of the second phase, all remaining departments at our existing site will transfer to the new site including our laser-cutting, steel preparation and fabrication divisions, as well as all office-based functions.”

The second phase building will comprise additional production space and will feature contemporary office space and meeting facilities at the front of the building. Among the plans for the new development is a beautifully appointed conference room overlooking the rolling Lincolnshire Wolds, which is set to be the perfect meeting place for Tong customers from the UK and worldwide to discuss their vegetable handling requirements whilst visiting the facility.

“The first phase building has already transformed our production, assembly and quality control processes. In preparation for the transfer of all departments to the new site this year, we have recently installed a second vertical storage lift in the new first phase building, allowing us to store a further 55 square metres of stock items and parts. Whilst it will feel strange to leave our existing family site that we have operated from for so many years, we are very eager to break ground on the second phase at the new site this month as we continue to fulfil our business expansion plans and ensure the continued development of our advanced and innovative range of vegetable handling equipment,” added Edward.