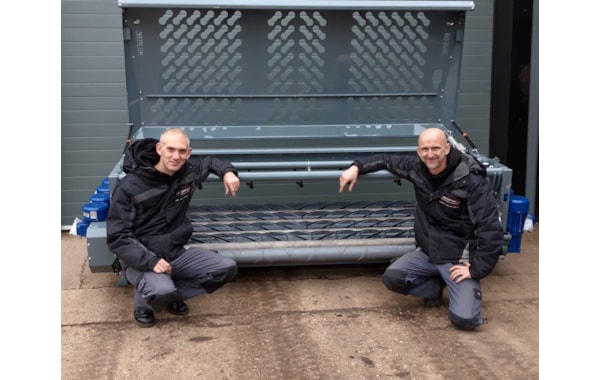 For the first time, Scotts sold out of toppers this season, reaching production capacity by the end of March.

Sales of the Evolution separator, the innovative harvesting machine which quickly and effectively removes clod, stones, haulm and loose soil from a wide range of vegetables, have risen in both the UK and further afield. Orders from North America, Belgium, Germany and Holland, have significantly increased in the past year.

At home, the banning of Diquat has fuelled interest from farmers looking for an alternative way of removing potato haulm before harvesting.

“We’ve had our best ever year,” said Derek Scott, managing director of Scotts Precision Manufacturing. “I think several factors have contributed. We’ve marketed ourselves more than in previous years, getting our name out there a bit more. We’ve priced our machines attractively, and people know that they’re really well made, reliable and get the job done. We’ve also listened to our customers’ requirements, and as well as increasing the transmission rating of the Trinity 22B two bed topper, we’ve also developed a new model, the Trinity 30B, which offers a 300cm cutting width, capable of handling either three 90cm or four 75cm wide rows.

“We have developed several new features to the Evolution, which had been led by customers, including programmable memory roller settings, Remote adjustment for the clod roll gap, stone resilient spiral rollers and a new gentle salad potato specific spiral rollers.”

The increase in demand has led Scotts to seek support from the European Agricultural Fund for Rural Development and the Lindsey Action Zone LEADER Fund, to undertake a £275,000, 6,000 square feet expansion of its Lincolnshire factory. Building work will be complete before the autumn, and four new members of the team have been recruited including two apprentices, allowing the Scotts to increase production output for 2020.

“We’ve already sold 30% of the toppers that we can physically build in time for 2020’s potato harvest and have just launched a new sales promotion, in which customers buying next year’s machines before September, can do so at 2019’s prices,” adds Derek.

Established in 1994, as well as the Evolution and Trinity toppers, Scotts also manufactures the VergenAir, an innovative machine that harvests roadside grass cuttings, allowing contractors to sell them to Anaerobic Digestion Plants.