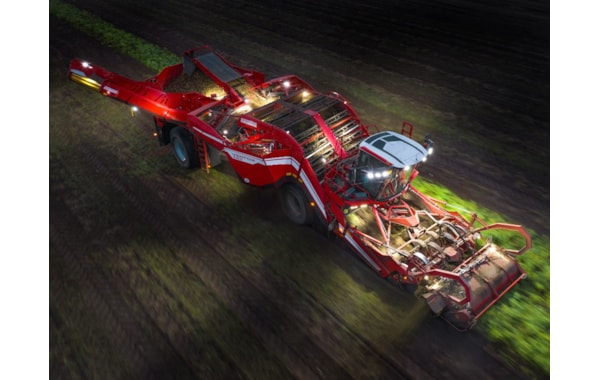 GRIMME'S four-row self-propelled potato harvester VENTOR 4150 will be equipped with some new practical features for the 2021 season.

It can now be optionally equipped with the HT 400 haulm topper, which is especially suitable for extremely high quantities of long, tough potato haulm. In addition to a significant increase in throughput, haulm topping prior to the harvesting process reduces the risk of losses on the deviner web.

The potato haulm is widely distributed on the already cleared area by use of a cross conveyor and an integrated haulm spreader. Automatic depth control is monitored via skids on the potato rows and can be conveniently adjusted from the operator terminal in the drivers cab. For road transport, the HT 400 is hydraulically folded over the intake unit.

For use on heavy soils, highly wear-resistant plastic share blades can be used, which helps reduces soil adhesion and keeps wear to a minimum, while share arms can now be protected against overload by a shear-off bolt. The required shear force can be varied with three holes for the positioning screws.

The optionally available "Speedtronic-Web" automatically adjusts the speeds of the main webs, including the deviner web, in relation to the forward speed of the harvester.

There is an option of large-volume "MICHELIN CEREXBIB 2" tyres which can be run at low inflation pressures, increasing the ground contact area and the bunker unloading conveyor has been revised in such a way that the unloading time of the 15-ton bunker can be reduced from 90 to 60 seconds.

For the documentation of harvest masses, the VENTOR 4150 can be equipped with an integrated system for mass mapping. Based on this data, a yield map can be created that visualizes zones of high and low yield. With the help of a Farm Management Information System (FMIS), a map for the site-specific application. All measured values can be stored in ISO-XML format and transmitted using a USB stick or the manufacturer-independent data exchange platform "agrirouter".