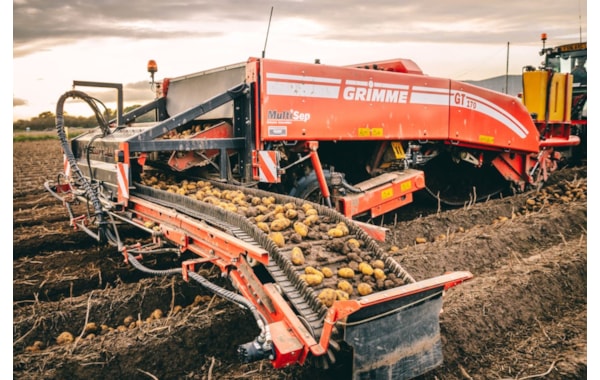 A UK harvesting equipment manufacturer has launched an innovative conversion kit that allows owners of the GRIMME GT 170 trailed harvester to convert seamlessly to a fully functioning windrower without modifications to the host machine.

Designed in response to local growers where the Grimme GT170 is their preferred choice of harvester, the Scotts GT170 Windrower conversion kit directly replaces the elevator module. As the kit is attached to the harvester through existing elevator fixing points, there is no need to modify the host machine and thus can be returned to its original set up quickly.

Managing Director of Scotts Precision Manufacturing Derek Scott said: “Our customer had tried other windrowers but was disappointed with the conveyor design or the performance of the machine in general so asked us if we could think of a way of converting their stock GT170, and this is the result. It wasn’t at all straightforward but we are really proud of how we have been able to create a conversion kit that is easy to mount, easy to use and easy to remove. This is the second machine we have converted for the same grower, the first was a lot lower spec host GT170 with limited cleaning and although performed well in average conditions fell down when 2019’s extreme harvesting conditions began to bite. This second conversion was installed on a much higher performing harvester with a digger web and double separators, even though the conversion kit has only been used locally, it has attracted a lot of interest, and we’ve had several strong enquiries, which tells us it should be a popular addition to our range.”

Scotts’ conversion kit features a 5.3m long cross conveyor that allows the lifted crop to be moved gently over the two rows next to the machine and deposited into the centre of the next pair of rows. The hydraulically powered conveyor can be positioned to discharge on the left or the right of the windrower. The conveyor has five sections and features self-cleaning and a soft low flighted 790mm wide sheeted PVC web.

The conversion kit integrates into the GRIMME control box, with the tip ends controlled by the original elevator swanneck up/down control switches. A separate left or right diverter valve is operated from an in-cab toggle switch within a 4” PVC control box that is held in place with magnets. Scotts has utilised the main elevator section to control the left and right movement of the conveyor. The conveyor belt drives via the original elevator web drive and the toggle switch mounted on the control box.

A maximum of six 36” rows can be lifted without moving the crop twice, which is beneficial to the user when making an opening for the harvester and the trailer. An additional benefit of the new kit is that the offside wheel can remain in its original position as there is no need to dispense the crop into the valley where the wheel runs.

Scotts has ensured that the drop height is as low as possible as both ends of the conveyor feature a hydraulic ram, which allow the tip end to be lowered.

For easy transportation, Scotts has engineered the conveyor in such a way that it can fold up to 90 degrees on each end, bringing the overall width within legal highway limits. Scotts has ensured that the conveyor cannot be folded by mistake by incorporating an electro-hydraulic safety system.

Derek says: “Traditional lifting with multiple 2 row trailed harvesters is becoming less and less attractive. Adverse weather patterns are driving the larger growers towards high cost self propelled tanker harvesters and on occasion chaser trailers to keep conventional trailers out of the rows. Our solution is far more cost effective and gives a second life of a previously expensive harvester by re purposing it. The advantages of windrowing are well know but in summary it opens up field breaks to avoid “nipping of rows, it opens up the field and headlands create much needed space for following harvester and trailers where tyre choice is no longer an issue; elevator harvester able to load trailers in half the time, potentially reducing trailer numbers; the windrower is self sufficient so can start sooner in the day and generally lifts more crop as there is no waiting for trailers; and it is proven to reduce overall damage to the crop by filling the harvester and reducing roll back.”

The kit, which costs £20,000, comes fully assembled with hydraulic hoses and cables for direct connection to the host harvester. Users have the option of fitting it themselves or asking Scotts or one of its dealers to install the kit for them.

As well as the conversion kit and windrowers, Scotts which was established in 1995, also designs and manufacturers a wide range of haulm toppers and the unique Evolution separator, which quickly and effectively removes stones, clod and loose soil from a wide range of vegetables..