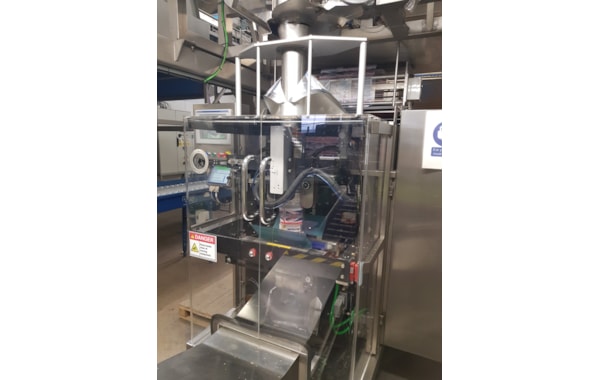 The installation was undertaken for RS Cockerill Ltd and will help the potato supplier use thinner and lower volumes of packaging film.

GIC has been working with Cockerill since 2002, with the company today having five high-speed continuous motion GIC8000s, four of which now feature Ceetak's Quick Pulse Heat (QPH) sealing technology. TOSS functionality has been retrofitted to the fifth GIC8000.

Until this project, GIC had only ever incorporated Ceetak's QPH sealing technology into new build machines.

As well as retrofitting QPH sealing technology and TOSS, GIC adapted Cockerill's GIC8000 machines to handle thinner film, as the company works with its supermarket customers to reduce the amount of packaging it uses.

Cockerill is one of the UK’s leading suppliers and packers of potatoes. The company, which was established in the 1930s, works with retailers, processors and food service companies, supplying over 100,000 tonnes each year. Cockerill’s is using its GIC8000 to fresh, graded and washed potatoes.

"Innovation and investment have been key to our growth," says Martin Cockerill, chairman of R S Cockerill Ltd. "We have worked with GIC for eighteen years and have always been impressed with the quality of the machines and the advice they give us, which is why we decided to retrofit these new features to the machines. It's worked really well, and our customers are very impressed with what we've been able to achieve."

Tests by Ceetak have shown that QPH sealing technology, which ensures a high integrity, completely fused hermetic seal, can produce up to a 10% reduction in film usage and up to 25% reduction in film gauge along with minimal cleaning and maintenance.

"We entered into a closer working relationship with Ceetak in September last year, and it has delivered significant benefits for our customers," says Andy Beal, GIC's managing director. "We are really pleased to have found a way to introduce QPH to existing machines as it will allow many current users of GIC machines to access the benefits of this functionality."

Integrating QPH sealing technology allows full calibration, control and diagnostics of the system via the GIC touchscreen. A dedicated Ceetak sealing page on the HMI enables the user to control all operating characteristics related to the sealing, cooling and release phases of the cycle. This page also allows the user to calibrate the system to ambient conditions, ensuring efficient use of the system, and diagnose potential faults and warnings through a descriptive dialogue box.

A further benefit to GIC machine users is that the company's machines can now feature interchangeable jaws, allowing traditional heat seal methods or Ceetak's high integrity QPH sealing technology to be fitted or removed quickly. This gives operators flexibility in specifying methods of heat-sealing polypropylene, polyethylene and laminates on the same VFFS machine.

GIC's machines integrate seamlessly with upstream equipment such as check-weighers, multi-head weighers, cup fillers and counters, with the company offering efficient and cost-effective after-sales to all of its customers in fresh and frozen produce, cereals, snacks, confectionery, pasta, powders and pulses, industrial hardware and liquids.