THE potato harvest is unique at P J Lee & Sons Limited. The company grows only late harvest main crop varieties and the 34,000 tonnes it grows must be harvested in as close to six-week window as possible, prior to the first frosts in early November. With such pressure on the harvest period, the pack house and four grading lines must operate like a well-oiled machine.

In previous years, P J Lee & Sons has relied on a workforce of 120-plus people to operate its harvesting operation and four grading lines, many of whom are seasonal workers. Brexit has had a huge effect on the availability of flexible, seasonal labour in the agriculture sector and last harvest Christopher Lee was struggling to get hold of the labour required to run the operation in an efficient way.  He had to take another look at how this harvest was going to be achieved.

Christopher purchased two VHM box filling and stacking systems from Standen Imports. VHM specialises in box and bigbag logistics that helps to build the efficiency of any washing and grading lines or in the pack house. Its modular system can help growers to build the most efficient processing and grading lines for their operating requirements. The system purchased by PJ Lee and Sons comprises two VHM sets of modules which contains a De-Stackr, a VHM automatic BoxFilr, a VHM in/out roller conveyor and a Stackr.

This combination works as follows: Four or Five empty boxes are loaded onto one of the Stackrs, this then un-stacks the boxes and slides an empty box across to the hopper box filler, which fills its own hopper to a desired weight of crop with its unique twin funnel design, ensuring the box is evenly filled. Once the hopper is full, the filler lifts the box up and fills it. Once full it drops the box down, and then the hopper starts filling again, the full box then moves across on the in / out conveyor and in to the other Stackr, which stacks the boxes two high ready for a forklift to take away two full boxes at a time.

In the traditional system, the staffing levels required to operate one grading line, filling 1.25t boxes off twin box fillers comprises two forklift drivers, two box levellers and a further one to two more forklift drivers to move boxes to storage. The VHM system reduces the staff levels to just one forklift driver and one checker. This effectively reduces headcount from six to two per machine. 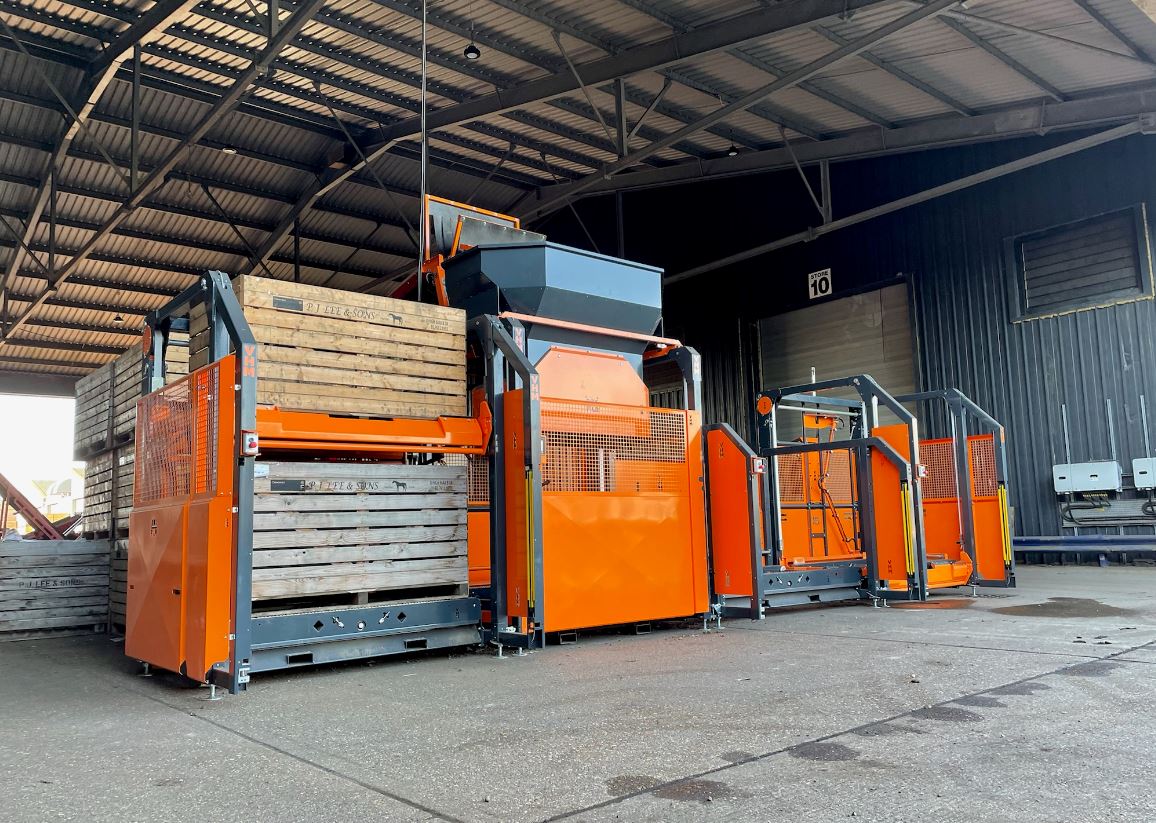 “The operation with the VHM system is very slick. The BoxFilr auto weighs each load in its hopper prior to discharging into the box so we can be absolutely sure of the box weight, optimising storage space. The neoprene lined hopper ensures that crop damage at that point in the process is minimal. Empty boxes can be loaded in and will be automatically de-stacked, filled properly finished and stacked two boxes high ready for movement into storage. We have eradicated much of the adjustment time required in ensuring boxes are stacked accurately and safely. Plus the whole system is touch screen controlled and is very easy and intuitive to use.”

One of Christopher’s primary concerns prior to purchasing the system was its ability to handle the five different box types that they currently operate on farm. He did not want the investment to extend to 18,000 more boxes to replace his current stock. The VHM is fully programmable to handle bespoke box sizes and at set-up growers can pre-set programmes for the differing sizes; altering pick-up, grab and drop points for each box type. Another concern was the way the English boxes would flow over the rollers and whether older boxes would catch and snag. “We worked with VHM to adapt the machine to enable the smooth and fluid flow of older, English boxes. VHM added in extra chain drives in the middle of the rollers to give the boxes some extra momentum. As a result we have had very few issues from this point of view.” Christopher noted.

Bespoke adaptations did not extend to the rollers. Standen, VHM and Christopher worked very closely and collaboratively to ensure that the system worked perfectly for the British market, with its higher quality and lower damage tolerance levels than on the continent.

Installation of the system was very quick and its web based processing system enables remote after sales support. “The customer service and after sales support that we have received from VHM and Standen has been some of the best that we have ever received. The team are knowledgeable and professional and incredibly responsive. As and when we have encountered any issues the team at VHM have accessed the operating system remotely and changed programmes to overcome the issues that we were facing, making changes in real time and reducing downtime to an absolute minimum.”

“Purchasing the VHM system felt like a huge risk that circumstances effectively forced us into. However, I cannot believe the variety of positive effects the VHM system has had. I am impressed by the sheer output of it and the reduction in areas of bottleneck in the grading and storage process that can occur in our ‘normal’ system.”

An additional and unexpected benefit of the system has been the positive effect that the VHM system has had on health and safety. With fewer forklifts and staff required to run each line there is less traffic and fewer pedestrians in the yard. The fully automated nature of the system leads to a calmer operating environment, during what can be a stressful and hectic time. The system can be remote control operated so can be stopped by the line manager from a distance if the need arises. There is also an ‘auto-stop’ system in place that detects when someone comes close to the machine which halts the whole process, effectively eradicating the risk of injury during operation.

So, does the system stack up financially? Christopher Lee said “From a headcount reduction point of view alone, we will break even on the purchase of the system in 2.5 x 6 week seasons. This may even be improved as I am planning on running the two systems next to each other next season in an attempt to trim another forklift operator.”