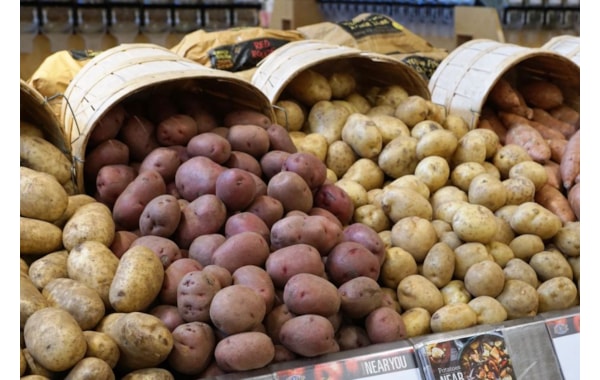 BRITISH Columbia needs to stop making potatoes faceless and bring back the edibles, according to Marjorie Stewart, past chairperson of the Nanaimo Foodshare Society.

Marjorie made the call in a column for BC Local News. An extract from her article is below:

According to Barack Obama, we are suffering from potentially crippling epistemic crisis. It helps to know that ‘episteme’ means knowledge and we’re talking about what knowledge to trust these days in order to arrive at a state of epistemic well-being. Kenneth Boyd (Psyche Magazine, January 2021) suggests we should: double or triple-check online sources, seek trustworthy sources, block mischief-makers and periodically examine our usual ways of collecting information.

Denial, hard-wired into humans, is a further hurdle to be overcome and requires help from trusted sources to overcome. Sources I trust, people accustomed to systems thinking, expect a collapse of urban civilization as the oil, gas and coal underpinning our urban/suburban lifestyles run out.

I am also an admirer of the work of Chris Smage, former sociology professor turned peasant farmer in Somerset, England, whose list of global threats runs from over-population through nine other global threats, including climate change, loss of fossil fuel energy, resources waste, failures in health and nutrition, land misuse, economic mismanagement and cultures of domination.

I think it is obvious that already the combination of over-population and over-consumption by all of us (not just the greedy one per cent) is the underlying cause of all the other crises. However many of us survive, probably the only useful contribution we can make now is at the local level, building real economies of local sustainability in basic needs.

One of the places we could make a small start is by rescuing the humble potato.

The Aztecs left thousands of varieties but all we see in our supermarkets are nameless yellow, white, red and ‘baking.’ In less than five years, potatoes have lost their names: Desirées, Kennebecs, Nicolas, Norlands, Russet Burbanks, Sieglindes and fingerlings can only be found in certain garden stores or purchased to grow at Seedy Saturdays and Sundays. Even Canada’s excellent Yukon Golds are lost among the yellow flesh.

What’s more, all of them are mushy. Boiled potatoes aren’t worth mashing even if you can coax them not to fall apart while softening. All you get is a miserable, tasteless slush reminiscent of wallpaper paste. Baked potatoes should burst in floury clouds when cut. Where are the firm, waxy potatoes I want for roasting? I speculate that corporate greed has overfed all the poor tubers with water just like the fat strawberries that look luscious but taste like cucumber.

Recently I met a middle-aged person who told me they didn’t like potatoes. Granted there were some bad cooks in the past who produced over-boiled, soggy potatoes beside hunks of badly cooked meats and other slops but they in no way represent the delicious sides the generous vegetable can bestow. Apart from boiled potatoes with a dusting of salt and a dab of butter or mashed over heat with milk and some seasoning, I expect to be able to produce from my small stove scalloped, roasted and baked potatoes that are mouth-smacking, let alone roesti, latkes, croquettes and seafood cakes, aloo gobi, Duchess potatoes and the classy Gratin Dauphinois.

Here’s to bringing back edible potatoes, starting at the farmers’ markets.