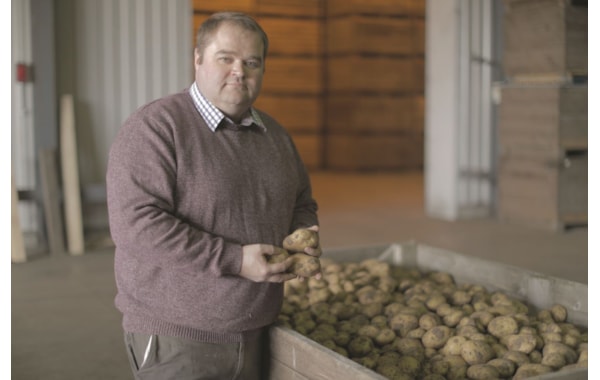 Some important observations surrounding desiccation were unveiled following a second year of trials at RJ and AE Godfrey, the SPot Farm North host.

Farm manager Will Gagg said 2019 had been a difficult year for the farm. Reflecting on the season, he said at one point he thought he would have to irrigate to lift as soils were so dry at the beginning of September.

“We went from a dry summer to four months of hell with the incessant rain,” he said.

Following withdrawal of diquat and the absence of like-for-like herbicide replacements suitable for desiccation, trials and demonstrations have been looking at different methods and their combinations.

Graham Tomalin, presenting the results on behalf of Dr Mark Stalham, head of NIAB CUF, said: “We desiccate because we need to stop further growth when tubers reach a specified size.”

Other reasons for desiccation include defoliation to facilitate harvesting, initiating skinset and reducing the risk of infection from pathogens, fungi, bacteria and for seed crop viruses.

Two demonstration plots and five replicated trials were undertaken across the SPot Farm network and at James Hutton Institute in Scotland, all of which followed to same protocols to build a strong data set. The work assessed indeterminate varieties, targeting vigorous, complete canopies at close to commercial defoliation timings.

Two applications at weekly intervals of different combinations of Gozai (pyraflufen-ethyl), Spotlight Plus (carfentrazone-ethyl), Finalsan (pelargonic acid) and Saltex (concentrated brine solution) were made, while one combination of Spotlight/Gozai was applied three times. Actives were also combined with flailing, and also a hand-simulated haulm puller for the seed experiments.

Assessments were then made at weekly intervals from the first application or defoliation.

“Most of the applications were applied under what I consider to be good conditions” said Graham, noting that by the time T3 was being applied, the untreated control plots were already showing signs of senescence.

Following desiccation, plots were assessed for speed of leaf and stem desiccation, skinset, and effects on yields and internal defects on both ware and seed crops.

Results showed all the Protoporphyrinogen Oxidase (PPO) Inhibitors to be similar across all the trials, but that pelargonic acid was slower than alternatives.

“It took the top foliage off, but at a slower rate and did not penetrate the foliage below.”

Reglone-treated crop had some green stems 14 days after application, but this had desiccated by later assessments. Spotlight and Gozai combinations generally performed better than expected.

“This could have been partly down to timing and also the bright conditions when the desiccant was applied. However, it did not provide a full canopy kill, particularly on the Royal crop at the East site, so skinset was slow and there was also a risk of late blight infection,” said Graham.

While flailing ensured the haulm was dead, the work also illustrated some of the difficulties of achieving a good flailing technique, particularly in trial plots.

Taken across all trials, Spotlight and Gozai combinations, generally had more leaf remaining three weeks after spraying than those sprayed with Reglone (diquat), although there was no significant difference Mr Tomalin pointed out.

For full details and results from the Spot Farm North event, see this month's issue of Potato Review.