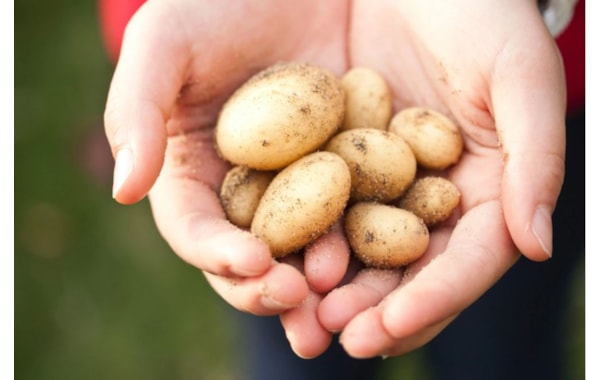 THE Bender family in America are experts in potato growing, from chipping to table varieties, and have revolutionized the way the way the US thinks about, cooks, and consumes potatoes.

In an interview with Boss Magazine reports, Nathan Bender, who heads up the company Tasteful Selections® spoke about his family's roots in Nebraska as chip potato growers to their current position as the leading producer of bite-size potatoes in the nation from their headquarters in Arvin, California.

“When we were digging potatoes in Nebraska and would take some home for dinner we'd always take the really small ones,” Nathan said. Potato growers “test dig” the spuds to determine their set and size, and often dig in the soil to determine moisture levels. During the summer grilling season in Nebraska, the potatoes are still small and not yet ready to be turned into chips. “On my birthday, we were cooking steaks at my buddy's cabin, and we didn’t have anything to go with them. I just went to my bucket, grabbed some, and roasted them over the fire with the steaks.”

The little leftovers would turn out to be a huge success for the Benders. Nathan's father, Bob, had moved to California to broaden the family’s growing business and learned that very small potatoes were becoming a hit in Europe and the company began concentrating on bite-size potatoes.

The Benders didn’t know how to pack, market, or sell potatoes, so, operating as CSS Farms, they partnered with Wisconsin-based produce marketing and sales specialists RPE and Plover River Farms. In 2010 the joint venture became Tasteful Selections®.

In 2010 the company grew from one customer to putting products in 19 of the top 20 retail outlets in the nation.

The decision to move to California proved to be a tremendous advantage for the enterprise, given how much shorter the potato growing season is in the Midwest and Plains States. Tasteful Selections® is able to grow year-round, delivering fresh product to customers and continually adjusting for changes in demand. Growing in more traditional locations lends to a more traditional model of a big crop that sits in storage for six to eight months or as needed.

The growing process begins in a Colorado greenhouse, where seeds are generated. After three years at seed farms, the plants go to farms in California, Arizona, and Nevada to be grown for retail. Tasteful Selections® owns the entire process, from seed to bag.

Tasteful Selections® plants approximately 250 days of the year, and harvests for about 340 days annually. It is the only bite-size potato producer that grows 12 months of the year, consistently bringing the freshest possible product to market.

“Right now we're planting in Bakersfield, we're harvesting up in our higher elevations, and we're constantly rotating. We'll go down to the desert and grow in the winter, and come here in the the spring, then make a loop,” said Nathan.