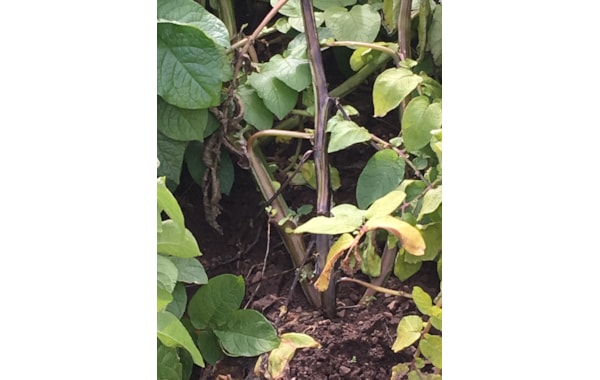 Scientists at the James Hutton Institute and partner organisations are working to understand the interactions between pathogen Pectobacterium atrosepticum and an array of soil-microbe-crop interactions in the development of blackleg, one of the most damaging bacterial plant diseases in the UK, responsible for annual losses of £50m for the potato industry.

The issue is at the heart of a £2m research project funded by the Biotechnology and Biological Sciences Research Council (BBSRC), Natural Environment Research Council (NERC), Defra and Scottish Government, featuring researchers from NIAB-CUF and the universities of Dundee, Durham, Glasgow, Newcastle and Strathclyde, industry partners Bayer Crop Science, SA Consulting, Scottish Agronomy, SoilEssentials and Scottish Government through SASA. AHDB will play an important role in the project’s knowledge exchange through its Farm Excellence Platform.

Project leader Professor Ian Toth, of the Institute’s Cell and Molecular Sciences department, believes scientists have the possibility of making a step change in the way blackleg is managed.

“Blackleg that appears in a ware crop may not necessarily be due to the contaminated seed, but to infection directly from the environment; something that could be managed at a local level rather than just with the seed producer,” he said.

Previous research has shown that when free-living nematodes are present in soil, a significant increase of blackleg-causing bacteria occurs in the stems of potato plants, highlighting an important association between these two groups of organisms.

“Currently there is a knowledge gap in the management of blackleg, and we wish to address it by characterising the identity and distribution of free-living nematodes but also microbial communities, and the ways in which they associate and interact with the blackleg pathogen through changes in factors such as irrigation and use of cover crops,” Prof Toth added.

“We also want to identify how and where on the plant infection takes place, and whether the management of nematodes or use of biocontrol agents derived from changing microbial communities might help to reduce blackleg infection.”

Recent modelling using the Scottish Government’s in-house potato inspections database shows that blackleg incidence on a national scale does not occur randomly, but in clusters.

Using data generated from this project, an extensive array of data from other recent and historical investigations and the latest data from government and industry, another aim is to identify trends and drivers of blackleg incidence in both space and time and, through this, produce predictive models to support the development of a set of decision support tools for growers.

“Through further testing, we will quantify the predicted effects of climate change on future blackleg incidence in association with free-living nematodes, cover crops and a range of other factors including soil moisture and planting and harvest dates, thus providing the industry with robust and novel data to underpin their sector resilience planning,” Prof Toth added.

The project Building a Decision Support Tool for Blackleg (DeS-BL) will run from 2020 to 2023 and more information can be found at https://www.planthealthcentre.scot/news/new-ps2-million-grant-bacteria-diseases-initiative.

* Full details of the above, with interviews, can be found in the September issue of Potato Review. If you aren't already subscribed, be sure to visit our subscription page at https://www.potatoreview.com/circulations/subscribe