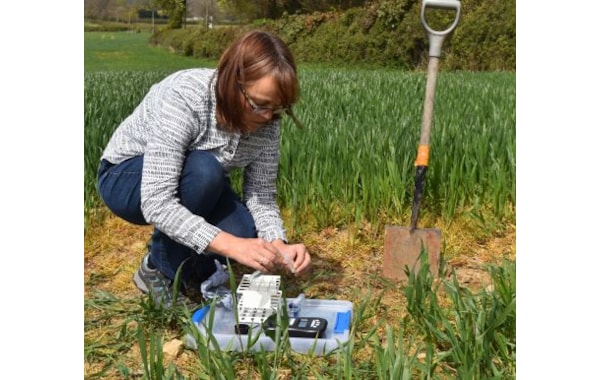 IT is reported that global phosphate sources may only last 30-100 years at current usage rates, ending the supply of phosphate fertilisers - but a new rapid in-field soil test kit could help farmers to more precisely utilise this valuable nutrient.

Designed as part of the Phosfield project, funded by ERDF’s Agri-Tech Cornwall programme, the test kit provides precise results within just 20 minutes - a massive improvement on the several-day turnaround by laboratories.

"Most farmers test their soils for phosphate every three to five years," explains Dr Susan Tandy, soil scientist at Rothamsted Research. "They usually take several samples from across the field and amalgamate them to get an average reading."

However, the level of phosphate will vary across fields, and more accurate GPS-located testing would enable farmers to apply fertiliser at variable rates - and thereby achieve more consistent yields. More importantly, phosphate availability can change over time and depends on the soil type, so by testing more frequently and knowing the soil type farmers can be even more accurate in their fertiliser application, she adds.

The test has been three years in development, and has been trialled in Ghana, where it could have significant benefits. "The technique would be extremely useful in developing countries as they have limited lab access to test their soils, meaning the application of expensive fertiliser is both financially risky and may not match crop requirement," Susan said.

Having nailed down the scientific process using Cornish soil samples, the researchers worked with Vital Spark Creative to produce an analytical kit which would be relatively easy to use in the field. "There are lots of different elements to the kit; if you're not a chemist it's pretty involved," says Chris Booker, Director at Vital Spark Creative. "We tried to make it user friendly, so that farmers can easily use it on the farm."

So how does it work? "You put a small soil sample into the bottle and mix it with an extraction solution before passing it through a filter," he said. "You then add various chemicals to get the final result, which is analysed in a colorimeter so the result is easy to read."

The results are very precise; but can also be translated into a phosphate index if desired. "The attraction of it, beyond speed, is that this test may well prove more accurate for different soil types," says independent agronomist Tim Martyn. "The phosphate fertiliser recommendations in the Nutrient Management Guide (RB209) are not soil type specific. Given the limited world phosphate supplies, more accurate measurement means we can be much more efficient with these resources, particularly in developing countries. It's really exciting."

Once the kit is acquired, each test costs pence rather than several pounds for a laboratory analysis. Although it's not yet commercially available, the team are seeking additional funding to bring it to market, and hope to undertake further research to produce tailored fertiliser recommendations for different crops and soil types.