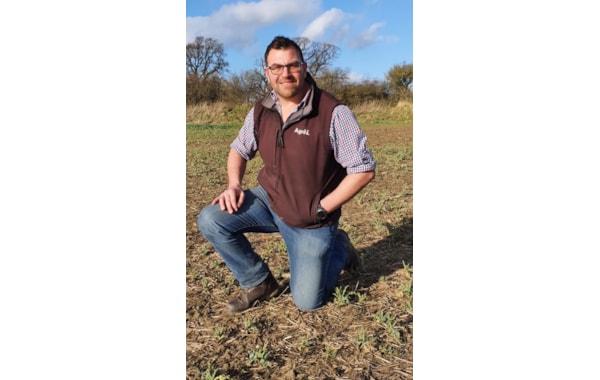 He recently joined De Sangosse for the launch of Fe-Lyn potato label at the company’s state-of-the-art ferric phosphate production and research facility in Agen, France. All product ingredients are sourced from within 300km of the factory.

“The facility produces the company’s global ferric phosphate requirement,” he says. “Attention to detail is clearly evident throughout the manufacturing process, which along with its modern research and development facility, gives us a great confidence boost knowing that we have a viable alternative to metaldehyde.”

Mr Naylor is responsible for agronomic advice across 2000 acres of potatoes grown in East Shropshire, Staffordshire and Warwickshire.

“Around 70% of my growers have already changed to ferric phosphate due to the incentivised scheme offered by Severn Trent Water to switch from metaldehyde,” he explains. “I am confident that most of the remaining 30% will follow this spring.”

De Sangosse trial data, along with using the product over the last three to four years in other crops, demonstrates Fe-Lyn’s superior quality over the competition and is a viable alternative to metaldehyde, according to Mr Naylor. In his opinion it adds a much-needed addition to the potato slug control armoury.

“This evidence is supported in the field by Agrii customers who have seen no yield or quality penalties across a number of crops where metaldehyde has been replaced with Fe-Lyn.

It is the highest quality ferric phosphate product in terms of attractiveness, palatability, persistence and spreadability.

“Metaldehyde has been given a stay of execution, but when stocks of remaining product have been used up, growers will have to switch to ferric phosphate,” he says. “But, it’s so important that growers understand how ferric phosphate works. The timings for application will be identical to metaldehyde depending on previous field pressure, variety and soil conditions, but growers need to understand the two actives work completely differently. With ferric phosphate there won’t be any dead slugs on the surface. Ferric phosphate acts as a stomach poison causing slugs to stop feeding immediately after ingestion, then slugs generally retreat underground and die.

“Slugs treated with metaldehyde die on the surface and when the crop canopy is pulled back they are easy to identify,” Mr Naylor explains. “Slugs that have ingested ferric phosphate do not die immediately and instead will stop eating and gravitate underground where they eventually die. Crop monitoring becomes even more important where ferric phosphate has been applied.”

In cereals and oilseed rape crops, he adds that Fe-Lyn has been rigorously tested for durability, persistence, evenness of spread pattern and attractiveness. With the product now also available in potatoes, growers can be confident going forward.

“Fe-Lyn spreads evenly at 24m with a single spinner or 36m with a twin system, such as a Stocks Fan Jet Duo, provided the spreader being used has been properly maintained,” he says. “Fe-Lyn’s durability also stands out over its competitors, especially in high rainfall situations. Some other ferric phosphate brands simply breakdown too quickly when they get wet. This increases the likelihood of having to go back in for a repeat application that was not planned, which leads to additional product and application costs.

“I know in other parts of the UK, the take up of ferric phosphate for slug control in cereals and potatoes has been slower and there is still some education required, principally because the behaviour of the slugs once the product has been ingested is different to that of metaldehyde.

“Growers who are new to Fe-Lyn can take confidence from others that have used ferric phosphate,” says Mr Naylor. “Fe-Lyn works very well due to its use of a high-quality pellet giving many benefits for slug control, especially important in potatoes when poor slug control can cost thousands of pounds.”