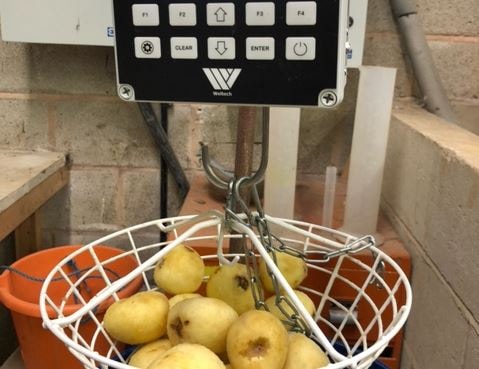 FIFTEEN years ago, Martin Lishman introduced the Weltech PW-2050 Digital Dry Matter Weigher to the potato industry, which marked a significant step forward in the practicality of measuring potato dry matter and starch levels and has proved to be one of the easiest and most accurate ways to do so.

This year will see the end-of-life cycle for the PW-2050 as Martin Lishman prepares to launch the new version, the Weltech PW4. Offering some significant upgrades to its predecessor, the new PW4 brings with it an easy-to-use button panel, a large colour LCD display with 5 language options, USB export as standard, improved battery life and an all-new software-based user interface.

“We are very excited to announce the new PW4 Potato Dry Matter weigher”, explains Gavin Lishman, Managing Director of Martin Lishman Ltd. “The current model has been a huge success in the industry and has proven itself to be a very valuable quality control tool to potato processors and growers all over the world. The new and improved PW4 model will continue this trend into the future.”

The PW4’s multi-lingual user interface combined with the new large LCD screen will increase the ease of use considerably. Calibration and weighing process are easy to follow with on-screen prompts and the new results layout gives the user all the information they need without the need to scroll. Exporting XML data to USB now comes as standard on the PW4 and upgradable firmware also brings the added benefit of additional features being added in the future.

Richard Swan, an Agronomist for PepsiCo , was brought on board during the testing of the new PW4 unit. He commented “The new dry matter tester has a much clearer display and is easier to navigate through, I thought how the new device displays the results was vastly superior. The battery life was also noticeably better than the previous model.”

The new PW4 is estimated to be available late 2021 / early 2022 and will join the extensive potato quality equipment range offered by Martin Lishman. This includes the well-known TuberLog electronic potato that provides instant alerts of bruising problems on harvesting, grading, and packing lines, allowing operators to decide whether remedial work is needed; the Potato Hot Box that enables processors and growers to test tubers for disease, infections and bruising to help  exclude tubers that might be rejected on quality grounds; Temperature Monitoring Equipment to help provide early warning of quality problems; and simple, easy to use tools to monitor fry quality, glucose content and size distribution.

Next generations more informed on sustainable growing and production practices

Getting to the heart of regen ag