BACTERIAL soft rots, such as Blackleg, can be a significant issue in some potato crops, reducing yield, causing significant losses in store, and in the case of seed potatoes, providing a source of inoculum for subsequent crops.

Although severe and advanced symptoms of Blackleg are usually easy to spot, early stages and latent infection can be harder to see and can lead to large losses in stored crops if not detected before harvest.

Because of this, more and more growers are testing crops for bacterial infection – including the bacteria which cause Blackleg – allowing them to plan storage and marketing regimes according to the risk of rots developing in store.

In recent years both seed suppliers and ware growers can use testing services, such as those offered by Fera, to identify crops that are at higher risk of developing soft rots in store, so they can be earmarked for sale earlier in the season or stored using cold stores rather than ambient facilities.

Another advantage to testing is where growers or suppliers have the choice of two or more similar seed stocks and want to identify those with the lowest risk of developing Blackleg over the growing season.

The test can be performed at any time in the season, although it is important to have a representative sample of tubers, and not just select those with signs of rotting.

Bacteriology Diagnostic Team Manager Brian Carter said: "Splitting into sub-samples reduces the potential for a few infected tubers to skew the overall result. We then report the level of bacteria found. If colony counts are below 1,000 then it’s considered a low-level risk, while between 1,000 and 100,000 represents an intermediate level and moderate risk. Anything over 100,000 you are looking at quite a high level and elevated risk of disease development.” 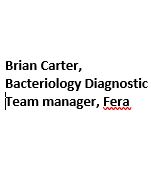 Brian (pictured above) went on to add that it's important to have a representative sample of tubers, not just those with signs of rotting. “It is important to understand that the test result gives a snapshot of the time when it is carried out, so while it provides a good indication of risk level, it is not predicting whether or not crops will develop soft rots in store for example,” he said.

“A crop with a moderate level of bacteria may store well for a reasonable time in a good facility, while one with a lower level may develop soft rot symptoms in a different environment. What testing does do is provide growers with the information needed to make an informed choice about their crop
and how best to manage it going forward.”