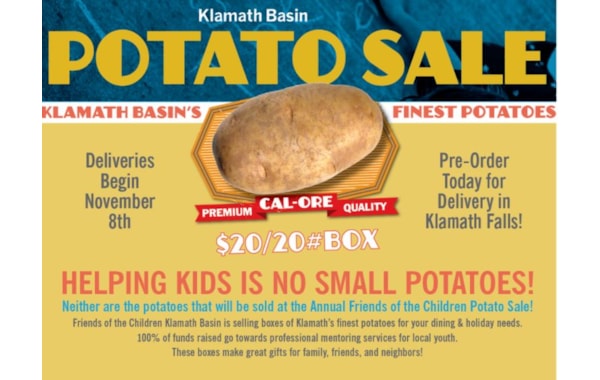 THE annual potato sale, now happening in Klamath Falls in Oregan, US, sells 20-pound boxes of ‘Cal-Ore’ potatoes for $20 a piece, raising funds for Friends of the Children.

The money goes toward the non-profit organization, which provides professional tutoring for children's kindergarten through to age 18, who struggle with school.

Friends of the Children – Klamath Basin sells the potatoes from a local Subaru dealership and banks in the area until they sell out.

Friends of the Children – Klamath Basin Executive Director, Amanda Squibb, said: “We so appreciate the support and as I said, this is a huge fundraiser for us."

The 550 boxes always sell out, she added.

The potatoes are premium russets donated by CAL-ORE Produce and the proceeds directly support youth mentoring.

The potatoes are also available for delivery in Klamath Falls or pick-up, by appointment, at 3837 Altamont Drive.

Friends of the Children is a national nonprofit that creates generational change by empowering youth facing the greatest obstacles through relationships with professional mentors, called “Friends,” for 12+ years. Friends of the Children originated in Portland, Oregon, in 1993. It was established in Klamath Falls in 2000.