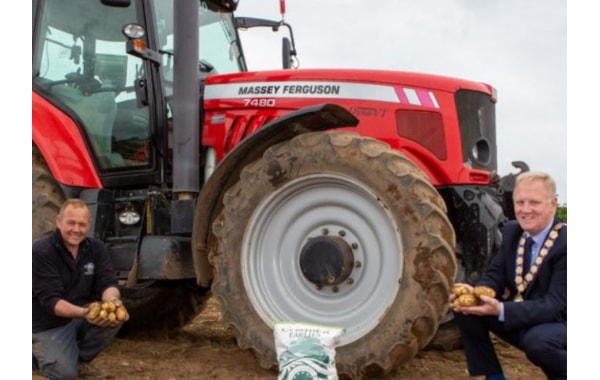 THE unique Comber Earlies potatoes have enjoyed Protected Geographical Indication status since 2012. The potatoes, which are grown around the town of Comber, are prized for their distinctive earthy, nutty flavour and smooth, soft skin and, according to Food NI which provides a single promotional voice for Northern Ireland’s food and drink, are best served with a knob of creamy butter and a sprinkle of salt!

Comber Earlies are the first potato harvest of the year and provide the perfect opportunity for shoppers to ‘support local’, the oranisation reveals on its website www.nigoodfood.com, stressing that its local farmers uphold the highest environmental, animal welfare and food production standards.

The Mayor of Ards and North Down, Councillor Trevor Cummings, said: “It’s important that we all support our local food producers. They have been working hard during these difficult times to ensure that we continue to have food on our tables and the quality of their produce is unrivalled. I would encourage everyone to purchase produce that has been farmed locally when they go shopping.”

Comber Earlies are available from the beginning of June until the end of July and are the first new season potatoes available in Northern Ireland. They have been grown on the shores of Strangford Lough since the early 17th century where the milder climate and fertile soil provide ideal conditions.

Alternatively, if the skins are allowed to ‘set’, they can be lifted in September and stored in a cool, dark, frost-free area as main crop varieties.

Comber farmer Harry Hamilton, of DJH Hamilton said this year's warm weather had added to the flavour of the Earlies and he'd received good feedback already from his distributors and customers.

The November issue of Potato Review ran an article entitled 'Good supply indications in Northern Ireland' (for which there is a link below). This article, featured within the magazine's International Focus section, mistakenly featured the wrong flag where it denotes the country those articles relate to. We would like to apologise for this error and any upset it may have caused to any of our readers in Northern Ireland.