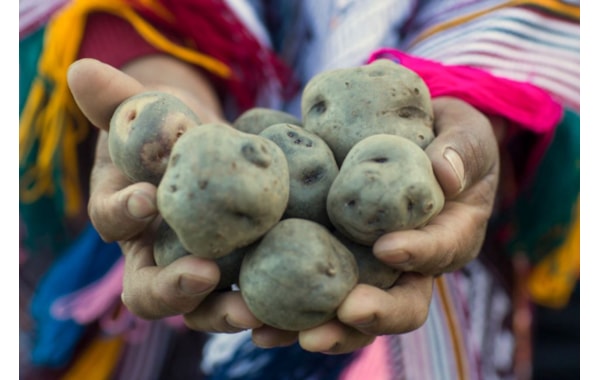 AS the impacts of climate change intensify — from water scarcity to raging fires and disease outbreaks — the ability to keep pace with demand for food will increasingly rely on crops adapted to new conditions. To achieve this, crop breeders will need the full range of tools at their disposal, a report by Oscar Ortiz, Deputy Director General for research and development for the International Potato Center, reveals.

So while conserving flora and fauna in their natural habitat remains an immediate priority, global food security in the long term must be futureproofed through continued investment in the preservation of plant genetic material.

Late blight
Tomatoes affected by late blight in a garden near Hilo, Hawaii. Photo: Scott Nelson/Flickr (public domain)
A model for this futureproofing exists at my organization, the International Potato Center (Centro Internacional de la Papa, or CIP) in Lima, Peru. Here we host the world’s most extensive collection of potato and sweetpotato material, which conserves more than 15,000 samples of root and tuber crops. This genetic material can be drawn upon to minimize disruption to food supplies if one variety is lost to natural causes like disease or human-caused processes like climate change.

The threat is far from theoretical. Already more than a dozen varieties of native and wild potatoes are in danger of disappearing due to temperature changes or loss of habitat, while diseases are emerging in new places to endanger other popular crops, including varieties of wheat and bananas, and their wild relatives. In total two-fifths of the world’s plants are at risk of extinction, according to new research.

Resilient Genes
Wild potatoes and sweet potatoes are the cousins of the third- and sixth-most important food crops on the globe. These wild species, although inedible themselves, are rich with hardy genetic traits that can be used to breed more nutritious, disease-resistant varieties of crops that underpin diets and incomes around the world.

For example, researchers have found that wild species of potatoes contain genes that provide resistance to late blight, the most destructive potato disease, which causes an estimated $6.7 billion in yield losses worldwide every year. The loss of just one wild potato species could both set back progress toward reducing losses to late blight and hinder recovery from large-scale outbreaks in the future.

Potato genebank
Varieties at the CIP genebank. Photo: Sara A. Fajardo/CIP (provided)
To provide defenses against such a future food apocalypse, collections of genetic material — not just of potatoes, but all crop species and their wild relatives — must be continually conserved, tested and renovated, requiring ongoing funding, research and innovation. With plant genetic material being a common good shared by and essential to all, it is in the interests of governments, development organizations and the private sector to make crop conservation a funding and policy priority.

Just as digital backups moved the world from storing information on floppy disks to the cloud, recent advances in genetic conservation techniques, such as DNA sequencing for digital catalogs and cryopreservation, offer new opportunities to preserve these staple crops for future generations facing new scenarios.

Frozen Value
The CIP genebank — one of 11 CGIAR genebanks protecting the planet’s crop diversity — began to cryopreserve crops in 1996 and now has the most advanced cryopreservation practices for potatoes.

Cryopreservation allows for the long-term storage of plant material in liquid nitrogen at temperatures of -320F (-196C). Among the advantages, for crop material, of cryopreservation over in vitro conservation are the time and resources saved — both in day-to-day maintenance of storage facilities and in the need to regenerate in vitro accessions, or plant material, every 1 to 2 years.

Cryopreservation
José Cardenas, right, works in the cryopreservation section at the International Potato Center’s genebank. Photo: Sara A. Fajardo/CIP (provided)
Scientists are currently in the process of cryopreserving all potato genetic material while developing ways to cryopreserve the more delicate sweet potato to help secure the availability of safe, nutritious crops into the future.

Maintaining diverse reserves of the widest possible variety of genetic material offers the greatest chance of protecting the public from potential food shortages. Indeed, breeders must screen thousands of potatoes over many years to identify only one or two that address the needs of farmers in terms of productivity and climate resilience.

Without a reserve of potential material to screen, important advances in new crop varieties would be stymied.

Meanwhile the cost-effectiveness of cryopreservation means more funds have been invested in other areas of research. In vitro conservation is incredibly labor intensive, requiring ongoing maintenance by specialized staff. But cryopreserved samples can remain in deep freeze for decades with little oversight necessary, freeing up more resources to dedicate to the conservation of greater crop biodiversity in natural habitats, the development of a generation of virus-free germplasm, and the repatriation and rediscovery of native varieties.

Now Is the Time
Despite their values, digital catalogs and the cryopreservation of crops and wild food plants remain under-appreciated, underfunded and underutilized by governments and international governing bodies.